St Raphael’s School is a school which operates with the consent of the Catholic Archbishop of Melbourne and is owned, operated and governed by Melbourne Archdiocese Catholic Schools Ltd (MACS).

St Raphael’s School is a MACS school in which:

MACS schools are established primarily for Catholic children. St Raphael’s School strives to be open and welcoming to all Catholic students, regardless of their background, and does everything reasonable to accommodate each student’s individual needs.

St Raphael’s School is open to the enrolment of children of other Christian traditions and faiths, however, priority will be given to children from non-Catholic Eastern churches. Children from other religious traditions or of no religion are provided with an opportunity to enrol in Catholic schools, should they choose to apply and there is sufficient capacity within the school.

Parents/guardians/carers are the first educators of their children. By enrolling a child in St Raphael’s School, parents/guardians/carers are entering into a partnership to promote and support their child’s education, in particular their education in faith. While the school promotes access to a Catholic education through the school enrolment policy, it is the parent/guardian/carers’ responsibility to support the school in furthering the spiritual and academic life of their child.

The order of priority for MACS primary schools is:

For the purpose of enrolment in a Catholic school, a child is considered to be Catholic if they are a member of the Catholic Church, usually established by a Certificate of Baptism.

The enrolment catchment area is a defined area from which a school enrols students as officially designated to a school by MACS. The parish for St Raphael’s School is St Raphael’s Parish In parishes with more than one primary school, the catchment for each school is determined by the parish in consultation with MACS. 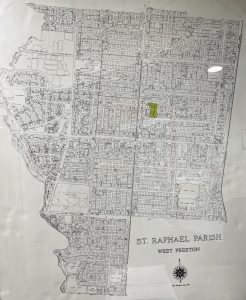 Enrolment is subject to the maximum capacity of the school.

For the purpose of enrolment in a Catholic school, a child is considered to be Orthodox if they are a member of a non-Catholic Eastern church, including Greek Orthodox, Coptic Orthodox, Ukrainian Orthodox, Russian Orthodox, Serbian Orthodox and other Orthodox.

‘Parish’ refers to the local parish as defined by its geographical boundaries and student location is based on home address.

Information to Be Collected

St Raphael’s School is required to collect particular information about parents/guardians/carers and their child. Parents/guardians/carers are required to provide particular information about their child during the enrolment process in order for MACS and the school to meet the duty of care obligations and to satisfy government requirements. Lodging an enrolment form does not guarantee enrolment at St Raphael’s School.